For over half a century, the Combard family has been handing down the winemaking tradition to its sons and daughters. Magali, Delphine and François took the helm of the winery from their father Alain Combard and are proudly carrying on his pioneering spirit. Blending heritage and innovation, Figuière is a traditional winery using time-honored methods that aspires to boldly and creatively cultivate a living legacy through novel winemaking techniques. 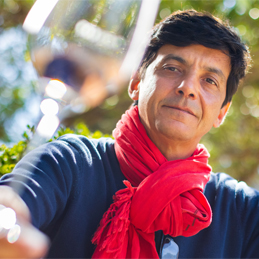 François graduated from the Beaux-Arts School and now draws inspiration from the vines and the nature around him. In 1997, he took over from his father, managing production with the intention of using his artistic talents to craft signature wines grown in his beloved and protected terroir. He loves getting up at dawn and taking quiet walks in the morning dew. He tends a kitchen garden and has a taste for a simple and good life, in harmony with nature and loved ones. He likes to say, "Good wine is made on the vine" and that human hands are only there to guide it, not to bring in artifice. His quest for balance and purity is fully expressed in the Figuière style. He also draws on his creativity when exploring new winemaking techniques and the art of blending, which makes him a trailblazer in a new generation of winemakers who honor the past and tradition while boldly shaping the future. 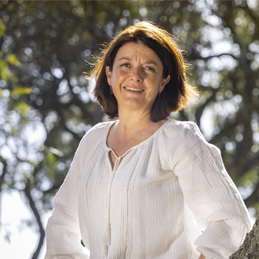 Magali is a tireless globetrotter who loves learning about the world and people. She brings her passion for traveling and meeting new people to her role as sales and marketing manager at the family-owned winery that she joined in 2004. Before then, she had been living in Paris for over 20 years but was delighted to leave in order to reconnect with the land and a quiet life far from the bustling city. Warm and spontaneous Magali has two children and loves inviting lots of friends over for big meals, as well as going for runs in the crisp vineyard air. She has earned her rightful place in a man's world where she shares her zest for life. Always on the lookout for new ideas and up on all the latest trends, she finds ways to work with the entire team to shape the Domaine's future by building its unique character and enhancing its reputation around the world. 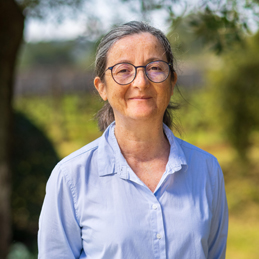 Delphine has a fascination for numbers, old stone buildings and life in the great outdoors – and for these three good reasons she agreed to manage the Domaine's finances. She has traded surfing on the beaches of Biarritz for paddle boarding on the Mediterranean and long walks through the vineyards. Amid landscapes that have existed for eternity where grapes are humbly grown with true passion, she is at peace with the sensible and demanding approach she takes to her job. Because this world traveler also loves going off the beaten track and striking the perfect balance in everything she does.

FROM BURGUNDY TO PROVENCE

The Combard family's winegrowing story began in Burgundy in the 1970s when Alain Combard joined his friend and partner Michel Laroche in developing what would quickly become one of the best wineries in Chablis. In 1992, the pilot, sailor and avid explorer went looking for new unchartered winegrowing country, which he found in Provence. A year later, he discovered the 44.5 acre Saint-André de Figuière estate and decided to establish himself there, steadfast in his belief that Provence rosés deserve the same place at the table as fine white wines.

Figuière is a family Domaine, so it is part of a long history of skills being passed on with a moral code that puts people first. This is a family in the broad sense of the term, a family at heart united by the same values, the same love for their craft, their terroir and the vineyard.

SEE WHAT WE DO AND MEET OUR TEAMS